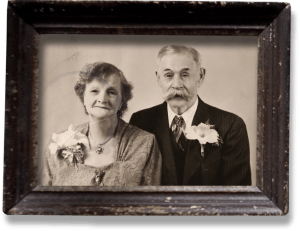 For generations, the Knutzen family has been working with cattle to provide quality products to their community –

It all started with Great Grandpa Alfred Peter (A.P.) Knutzen, one of 7 Knutzen brothers that settled in the Skagit Valley, who were all dairy men and farmers.  A.P. worked hard on the farm and shared his knowledge of the trade with all his children, especially his youngest son, Warren “Bud” Knutzen.  A.P.’s legacy lives on today in Knutzen’s sauce named after him, “A.P.’s Whiskey Hollow Walla Walla Sweet Onion Marinade”.

The next generation of dairy men began when “Bud” Knutzen took over his father’s trade and started his career at the Mason County Creamery (later purchased by Darigold). Bud and his wife, “Dottie”, eventually had Steve, patriarch and founder of Knutzen’s Meats.  Bud & Dottie’s memory lives on today in the form of “Bud’s Bourbon Buckaroo Marinade” and “Dottie’s Devilish Inferno BBQ Sauce”.

Steve Knutzen entered the meat business in 1971, when he learned the trade of meat processing, cutting and wrapping while working for a local meat processing business right here in the Mid-Columbia. The Knutzen family-run business got its start in 1974 when Steve built a mobile farm slaughter truck. In 1983, Steve started custom cutting and wrapping and opened his doors at 6404 W. Court Street, Pasco, WA, in 1987. For over 40 years, the Knutzen family has been providing meat services from mobile farm slaughtering, custom processing, retail meat counter and specialty meats from our smokehouse. Knutzen’s Meats has been serving the Tri-Cities and surrounding area from the same Pasco, Washington location on West Court Street since 1987.

In that time, Knutzen’s customers have come to expect not only the choicest meats in the region, but the personalized customer care that keeps people coming back. That’s because at Knutzen’s, we know what makes the difference—quality, natural meats, and treating people right. 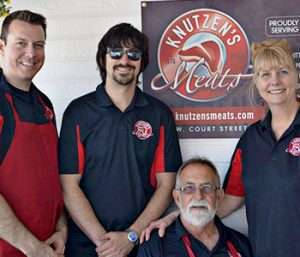 Today, we’re proud to remain a family-run business that’s stayed true to our roots. We’re proud to have never wavered or compromised our values, continuing to provide only the finest selection of natural meats, from ranches that boast humane-slaughtering techniques, as well as organic and grass fed diets. Here at Knutzen’s, we think your meat should be just that—meat. We don’t sell beef pumped full of antibiotics, hormones and who-knows-what. Our only interest is in delivering safe, clean, natural beef, for you and your family.

So whether you’re looking for that choice prime-rib for a family gathering, or a savory rib eye for that special occasion, come see us at the intersection of Road 64 and Court Street in Pasco. We’ll take care of you.